I am often asked why I “serialize” some of my short stories.

The easy answer would be because as a child, my parents inundated me and my siblings with magazines and kid’s newsletters—Highlights, Boy’s Life, Weekly Reader—which sometimes serialized stories. I was totally hooked on them, fighting my brothers and sisters for every single copy. (You should also know that my parents were teachers, so reading seemed liked the perfect way to keep a herd of five children busy.)

Or I could tell you that I found the continuing stories of Brenda Star, Mrs. Worth, and Dick Tracy—always featured on the comics pages of the Milwaukee Journal or the Chicago Tribune—enthralling. I could not wait for the next installment. My parents loved having a child who actually ran out and collected the newspapers each day, without having to ask.

But I won’t. Because that’s only part of the truth.

Perhaps more revealing is that I love some of the characters in my short stories so much, I simply don’t want their adventures to end.

Like the Sheikh and his American lawyer wife, Harun Ali and Marianne Benson. Something about this couple just stirs my heart. A lawyer whose husband was killed in Desert Storm, inspired by 9/11 to fight for the victims of terrorism, falls in love with a lawyer from the Middle East. You see, this is more than just a story about a heart-throbbing, panty-wetting, hot and sexy romance hero. It’s about two people reaching across a cultural divide to find love, despite the prejudice, despite the danger, despite the risk.

This couple loves hard and loves deeply. They are as passionate about each other as they are about their fight for the victims of terrorism. They have faced with some dangerous circumstances, but they remain strong, because they have each other. They are not without conflict, but they love enough to resolve their differences. They understand that love always finds a way.

And then there’s the police chief and the criminal defense attorney, two people who fight for what’s right, rather than what’s expedient, or the law school professor who moonlights as a secret agent and is in love with her own James Bond. And Munk, the lawyer newly diagnosed with Multiple Sclerosis, a chronic illness I share.

How can I stop fantasizing about their lives, about the perils and dilemmas they face? Their journeys are long and romantic and just too damn scintillating to end.

Can you blame me? 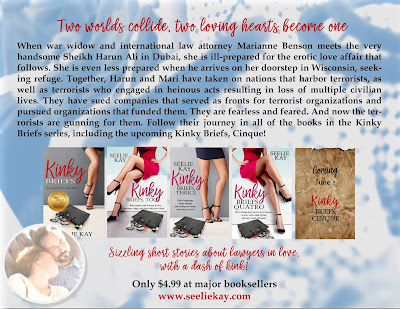