This week in The Loft: Author Holly Bargo!

Joining me today is author Holly Bargo. The pseudonym she uses was actually the name of a temperamental Appaloosa mare!  Holly writes western, paranormal,and fantasy romance. The author and her husband live on a hobby farm in southwest Ohio with a menagerie of horses, cats, and one really big dog. She also has two adult children. 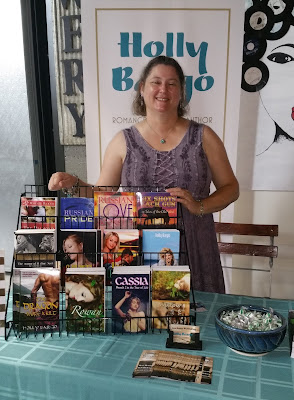 Let's start with an obvious question. How are you coping with the self-isolation rules?

H:  Since I work from home as a freelance writer and editor, the current lock down due to COVID-19 really hasn't impacted my daily routines. I work primarily in solitude, which suits me. I do miss going out to lunch once every week or two with friends, since even diehard introverts need some human interaction. What I have noticed is that good writing and editing gigs have become scarce. People and businesses suffering a substantial reduction in income aren't spending their limited funds on writers and editors. They're more focused on paying critical expenses. I understand that. I hope people use this time to write those books they've always dreamed of writing and will do what's in the best interests of those stories when life returns to normal.

S:  (Nods.) We choose to be isolated so we can write, just not that isolated. If we didn't take breaks to socialize, we'd become hermits!

H:  I really had no choice. Even as a little girl, I wrote stories. Fairy tales and mythology fascinated me. I read books for adult audiences when I was only in middle school. I remember doing a book report in the seventh or eighth grade on "Help, I’m a Prisoner in a Chinese Bakery!" by comedian Alan King. I found the social commentary directed at a 1960s audience hilarious, but my classmates didn’t see the appeal and my teacher found such reading strange, if not inappropriate. Anyway, I entertained other career options. I love animals, so I thought to become a veterinarian. The discovery of being squeamish killed that idea. Math and science confound me. And let’s be honest, there’s not much of a market for historians. I like flowers, but loathe gardening, so a career in landscaping or horticulture was out, too. I tried retail. For years. And I hated it. There weren’t too many options left, so I needed to find jobs that employed my best skill--writing. Today, I’m self-employed as freelance editor and ghostwriter.

H:  When I started writing, I didn’t know about genres. I merely wrote weird, fantastical stories that tickled my fancy. Looking back, most could be categorized as fantasy or science fiction. In high school and through my twenties, I was an avid reader of both. I also enjoyed westerns, mysteries, suspense, and thrillers. Mom introduced me to Walter Farley, Zane Grey, Barbara Cartland, Helen MacInnes, and a dozen other authors whose work I gobbled up. All that pan-genre reading influenced what I wrote. My first book-length manuscripts, which will never see the light of day, were fantasy, but they incorporated strong romantic subplots. Today, my books often span genres.

S:  Do you remember your first kiss? What was memorable about it?

H:  My first boyfriend lasted two dates. We didn’t use the term “ghosted” in those days, but after the second date, he apparently fell off the face of the planet. I wasn’t heartbroken so much as annoyed. My second boyfriend was originally the boyfriend of a girl with whom I worked. He’d come to visit her, and we’d trade banter, flirt a little, and exchange friendly insults. She dumped him. I went out with a friend who invited him along. I had just turned 21 years old. We met at a bar for drinks and dancing. I think someone dared him to kiss me. I remember being slightly horrified and blurting, “I’ve never been kissed!” He got a determined expression on his face and said, “This won’t be the last time.” We married two years later. This summer we’ll celebrate our thirty-second anniversary.

S:  Wow. What an incredible story! Congratulations on your anniversary!

H:  At any given time, I have over two dozen started manuscripts. However, most will never be developed. They’ve languished long enough for me to admit that. Sometimes, I get a spark of an idea and run with that. That’s how my next release, "Focus," happened. Sometimes feedback from readers guides my effort. My next book, which I started in late March, will be developed because readers asked for a sequel to "Hogtied," which was published on February 14. However, contrary as I am, it won’t be the story they’re expecting. At this time, one might even say that I’m working on two books. "Focus" is due for release on May 1, and the as-yet untitled sequel to "Hogtied" should come out by the end of August.

S:   Obviously, you are good at multi-tasking! How many books do you average a year?

H:  I average three or four books a year. Last year, I published "Six Shots Each Gun," a collection of western short stories, in collaboration with western author Russ Towne. I also published "Triple Burn," a reverse harem, science fiction romance, "The Eagle at Dawn," the fourth book in my paranormal romance Immortal Shifters series, and "Satin Boots," a collection of sweet and clean, short western romances. This year, I have already published "Shot from the Hip," which combines my stories from "Six Shots Each Gun" with the short stories from "Satin Boots," and "Hogtied," a biker romance. "Focus" will be my third book of 2020, with the sequel to "Hogtied" my fourth. After that, I may swing back into westerns or fantasy or science fiction. I just don’t know at this point.

S:  Which book is your favorite thus far?

H:  I have trouble determining my favorite book. I consider "The Falcon of Imenotash" my tour de force. This small book really packs a tremendous punch. There are so many layers to that story. It just poured out of me. It was one of the fastest manuscripts I ever produced. My favorite hero remains Uberon, the Unseelie king who gets his own story in "Daughter of the Dark Moon," the last book of my Twin Moons Saga. My favorite heroine is Rowan Nemed, the protagonist of my first self-published book and the first book of the Tree of Life trilogy, "Rowan."

S:  Tell me about your latest book, "Hogtied."

When a biker shoots her sister's prize steer, champion roper Melanie goes after him. Unfortunately, she doesn't think it through, and that hot temper puts her squarely in Hammer's sights. Melanie's ire only increases when Hammer defuses the dangerous situation by claiming her as his property. If the former Marine and now sergeant-at-arms of the Black Ice Revolution MC thinks she's his for the taking, he's sadly mistaken. She wants nothing to do with him, but he's not about to let this sexy, feisty woman go. 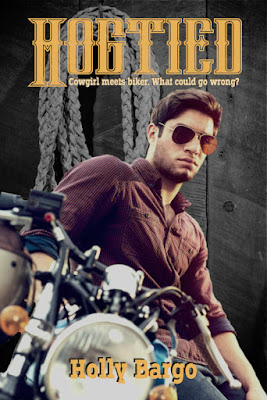 S:  (Giggles.) That sounds really hot! Where can readers buy your book?

S:  Holly, thanks so much for joining me today! If you would like to learn more about Holly and her books, please visit--