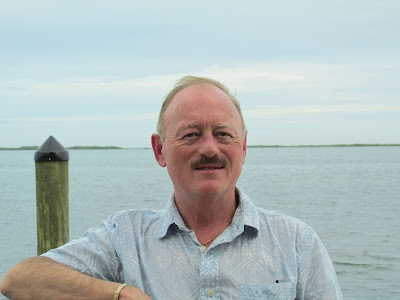 Author Tim Smith
S:  Good morning, Tim! I'm am so happy you could join me today.

T:  I’ve had an interest in writing since I was in high school, but I didn’t really pursue story writing until years later. I had gone through some life changes, and decided it was time to indulge my interest. I had an idea for a character and a story I wanted to tell, and finally told myself to either write the damn thing or stop talking about it. For once, I heeded my own advice.

S:  (Smiles.) Some of the best advice you can give a fledging author is to "just do it." It starts with a single sentence.

Do you write full or part-time? Do you have another job or other responsibilities?

T:  I write full-time now, and have been able to for the past few years. I’m a freelance writer, editor and blogger, in addition to producing three new books a year. These consist of one full-length adventure in one of my ongoing series, a summer beach read, and a holiday romance. I don’t have another job to distract me from that, unless you count home maintenance.

S:  Complete this sentence--"When I started writing books, I wish I had known..."

T:  …how much time and effort I’d need to put into marketing and promotions. I wish I had spoken to people with more experience in the field, because it’s very competitive and hard to know what works and what doesn’t. When I first became published, print books still dominated the field, and most writers didn’t have an online presence. Book signings and personal appearances were what you went after. When eBooks became the new standard, online self-promotion became a necessity just to keep up with the number of new books released each year. I had to catch up or get left in the wake.

S:  (Nods.) I began writing when social media exploded, so I not only had to learn how to market a book, but also how to navigate social media. I'm not sure I have figured it all out yet. Still, it does take a lot of time and effort.

Is there anything you wish you had done differently when you began writing books?

T:  I would have researched the market more thoroughly to identify the audience for my books. I primarily write romantic mystery/thrillers, with tough guy heroes getting into all sorts of adventures while finding romance along the way. That crosses over into several sub-genres, and it’s still hard for me to categorize my books when I release a new one. I think the other thing I would have done when I signed with my current publisher is change my name to something ambiguous. Being a male who writes straight contemporary romance under my real name has made it tough to get accepted.

S:  More and more men are "coming out" as romance writers. I think it's a good thing. It brings a more authentic male perspective to romance.

T:  When I come up with an idea for an adventure story, I decide which of my two series characters it would best fit. Some of my plots may work well for a private eye, but not for a former CIA spook trying to live off the grid. When I begin writing, I typically have a beginning, middle, and ending in mind. Along the way, the plot might change as new ideas come to me. I’m not one of those writers who has to produce a certain quota of words per day, because I’m not that disciplined. It all depends on my mood when I wake up that morning.

S:  (Grins.) You are certainly not alone. I can't force myself to write. If the words aren't flowing, I'll bake bread or take a walk down by the lake. My mind seems to know when it needs a distraction and I just go with it.

Tell me about your new book, "The Big Fall?" What was your inspiration?

T:  In “The Big Fall” I wanted to put my hero, former spy Nick Seven, in a difficult position that he would have to get out of by using his skills and training. He’s being set up as the fall guy for a murder he didn’t commit, and in addition to proving his innocence, he has to unmask the real killer and motive. When you drop your hero into a situation like that, it’s fun to see how they’re going to get out of it. Some of my inspiration for this one came from current events and the crazy world we live in, where social media seems to influence everything.

Just when you think life can’t get much better, a crashing wave wipes out your sand castle. Former spies Nick Seven and Felicia Hagens are taking a break from Key Largo to visit a casino owned by Nick’s friend, Rock Bianco. An unexpected, nasty encounter with one of Nick’s former lovers turns disastrous when she’s killed shortly afterward. The police and the girl’s wealthy father are convinced that Nick did it, despite the lack of hard evidence. The billionaire industrialist wages an online smear campaign to make Nick look guilty, including sordid details from his past career in the CIA. The stakes become more personal when the fallout impacts Felicia, testing their relationship. Nick fights back, but why is the man determined to hold him responsible for his daughter’s murder? Who really killed her and why is their identity being shielded? Can Nick and Felicia resolve this crisis and reclaim their idyllic life in paradise? 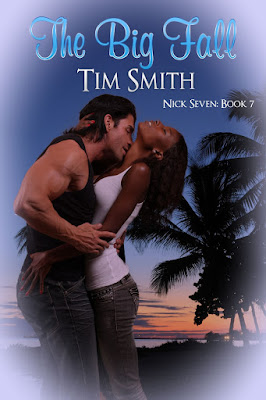 S:  Sounds like you have another bestseller on your hands. We've all seen reputations trashed on social media, often for no reason other than it amuses others. What a test for a relationship!

T:  It was released last Friday by eXtasy Books and will be available soon from all major booksellers. Here's the eXtasy link--https://www.extasybooks.com/978-1-4874-3076-4-the-big-fall/.

S:  Tim, thanks so much for joining me today and sharing information about your new book. If you would like to learn more about Tim and his books, please visit--