It's release day for Infamy!

My latest book, "Infamy," is now on sale! 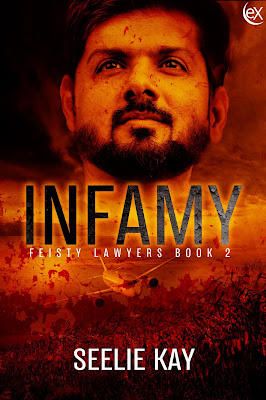 Infamy. An evil or wicked act. Terrorists bent on revenge have found a way to make planes disappear from the sky, without a trace. And when one winds up buried in a Wisconsin cornfield, it’s a race against time to rescue the passengers from certain death.

When international law attorney Sheikh Harun Ali is lured to the Amazon and warned of a frightening plot against the United States, he and his wife, Marianne Benson, enlist the assistance of their neighbors, covert agent Cade Matthews and his wife, Constitutional Law Professor Janet MacLachlan. Ultimately, these feisty lawyers are pushed to the wall, desperate to find a plane that has been buried in an unknown cornfield, the passengers still on board. The terrorists’ hatred for the Alis is absolute—the Alis once left their organization bankrupt and broken—but they hate America more. And their fiendish games are just beginning. They are seeking a much bigger prize, one that could destroy a nation and possibly the world. An act that will live in infamy.

Cade grasped his water bottle with both hands. “Before his brother died, he said eight words.”

Harun nodded. “They are going to make American planes disappear.”

Anders rubbed a hand over his face, then through his long dark hair. His deep green eyes stared up at the ceiling of the plane. “Fucking hell. Nine-eleven all over again.”

“That is our fear,” Harun said. “However, so many precautionary measures are in place in this country, simply hijacking planes and flying them into buildings is no longer easy. They must have a different plan.”

Cade emitted a heavy sigh. “And that is what we need to figure out. What exactly do those eight words mean? For example, he did not specify that the planes would disappear in America, which could mean that they will disappear abroad or over oceans.”

Anders sat up straight. “And disappear could mean many things. Crash. Hijack. Pull a Malaysia. How many ways can you make a plane disappear?”

Coming soon to all major booksellers!