This week in The Loft: J. Arlene Culiner

Today, I welcome romance author J. Arlene Culiner to The Loft! J. Arlene has lived an adventurous life. She has crossed much of Europe on foot, and lived in a Hungarian mud house, a Bavarian castle, a Turkish cave dwelling, on a Dutch canal, and in a haunted house on the English moors. Her adventures have required her to embrace all sorts of occupations (hey, a girl has to eat), including belly dancer, fortune teller, actress, radio broadcaster, and photographer. She certainly has plenty of inspiration for her stories! J. Arlene currently resides in a 400-year-old French inn. 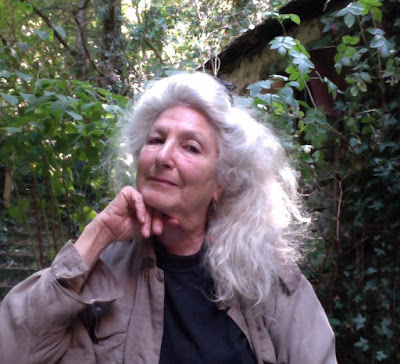 S:  Good morning, J. Arlene! Thanks for joining me today.

Do you write full or part-time? Do you have another job or other responsibilities?

J. A.:  I don’t write full-time because doing just that would drive me crazy. I have stories in my head, but I can’t see just sitting down and writing them all day. I’m also an artist--social-critical work--and an amateur musician. I play many instruments—tuba, oboe, English horn, flute, baroque oboe, and recorder--in several orchestras, chamber groups, and bands. My house is also a mini-museum that I open to the public. (Editor's Note: Please see http://www.jill-culiner.com). In addition, I am an audiobook narrator, and I spend a lot of time walking along the green lanes that crisscross all of Europe.

S:  (Smiles.) Wow, as a musician, you certainly put me to shame. All I could manage was piano and French Horn!

Did you undergo any sort of educational or other training to become a writer?

J. A.:  My apprenticeship was writing for many long years, and much reading in every genre. I know that the first books I wrote were just awful, and from time to time, I look at them and wince, but I am pleased with the style that I’ve since developed. I remember once meeting a man who told me he had written seven books and had never had one accepted by a publisher. However, he had just received a personal rejection letter from a major publisher, so he knew he was on the right track. He was certain that the eighth or ninth book would be accepted. I’ve thought about that man many times. He was my model while learning to write well.

S:  (Nods.) I think the act of doing is the most effective teacher.

What makes you unique as a writer?

J. A.:  I wouldn’t say I’m unique in this, but my goal in writing every book is to pass on information. It isn’t enough for me to write a romance with a hero and heroine and their problems. I want readers to learn about things they don’t know because that’s also what I need to find in a book. Therefore, in my stories, there is information about different ways of life, Western history, the spider world, snakes, Baroque music, and village life in Turkey.

J. A.:  As Jill Culiner, I have written two very unromantic mysteries set in France— "Death by Slanderous Tongue," and "Sad Summer in Biarritz." I also write non-fiction books about Eastern European history. My "Finding Home in the Footsteps of the Jewish Fusgeyers" won a prize for Canadian history.

S:  What attracted you to the romance genre?

J. A.:  I enjoy writing realistic romances with true-to-life heroes and heroines, people who, despite all the hurdles life might throw at them, do manage to find love. It’s those satisfying endings that tell us that love is there for everyone if we know how to give. But also, since I do write about Eastern European history—a heavy subject—I like to write romance as a counter balance. In addition, it is exciting writing about the first stirrings of love, the possibility of happiness, and trust.

J. A.:  I can’t guarantee this was my worst date ever--because we’ve all had some real humdingers--but I do remember being asked out to dinner by a man who was very boring, never asked a question, but carried out a monologue throughout the meal. Then, when the bill came, he announced he had forgotten to bring his wallet and that I would have to pay. I knew he had a decent job, and I really didn’t have much money in those days. However, I did have enough to cover the bill. So I did pay, and when the waiter brought the change, this charming man immediately reached out and pocketed all of it. I was too young and wishy-washy to say anything, but he’d never get away with that now.

S:  What was your inspiration for "The Turkish Affair?"

J. A.:  I wrote "The Turkish Affair" for many reasons. I wanted to take my readers on a trip to a country that they probably didn’t know, or didn’t know well. I wanted people to experience life on an archaeological site, and I wanted to share what I knew about the Hittite civilization. Like Anne Pierson, the heroine of "The Turkish Affair," I once lived and worked in central Turkey, translating for tourists, and I spent quite a bit of time on archaeological sites. When I lived there, it was a difficult time. The police were untrustworthy, there was political unrest, there were frequent arrests. Many of the incidents in the story really did happen. I did find myself in a dangerous situation on a lonely lane, and I really was rescued by a bold young woman. I was present when archaeologists were called down to the coast to identify stolen coins, and the thefts from an archaeological site really did happen in the way I describe them. I also met police who were as corrupt and dangerous as those in the story. Of course, Anne’s story is very different from my own, but even my hero, Renaud Townsend, is based on a real person. One afternoon, while passing through an archaeological site, I caught sight of a man ambling in a tumble of ruined pillars. He was lean, supple, and the bright sun caught the golden blaze of his hair. He was the perfect hero.

Love and Danger at the ancient Hittite site of Karakuyu.

Priceless artifacts are disappearing from the ancient Hittite site of Karakuyu in Turkey, and the site director has vanished. Called in to solve the mystery, archaeologist Renaud Townsend is hindered by both his inability to speak the language and the knowledge that the local police are corrupt. His attraction to translator Anne Pierson is immediate, although he is troubled by her refusal to talk about the past and her fear of public scandal. But when murder enters the picture, both Anne and Renaud realize that the risk of falling in love is not the only danger. 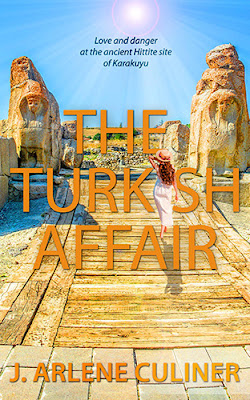 S:  That sounds fascinating! Where can readers buy your book?

J. A.:  It's available at major booksellers, including--

S:  J. Arlene, thanks so much for joining me today. If you would like to learn more about J. Arlene and her books, please visit--