Someone is killing Chicago lawyers! 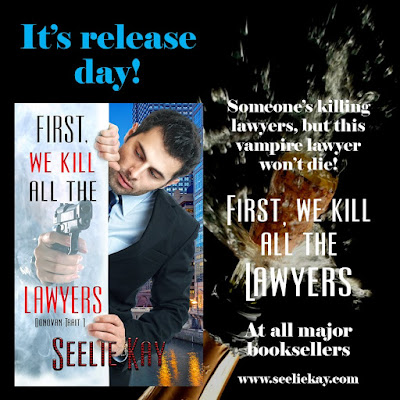 Someone is killing lawyers, but a particular vampire lawyer won't stay dead!

Donovan Trait is a marked man. He is flamboyant, stunningly handsome, and notoriously insatiable, but his attitude and style belie his skills in the courtroom. No one survives a cross-examination at Donovan’s hands. His knowledge of the law and trial practice has accumulated over the years… and years, of experience. More than three hundred years. You see, when Donovan isn’t seducing judges and juries, he’s a creature of the night. And now that someone has decided that it’s time to kill all lawyers, his lust for attention has set him in the murderer’s sights.

The problem is that vampires don’t die. Not easily, anyway. That’s good news for Donovan, not so much for his very human lady love, also a target of the serial killer. Will several unsuccessful attempts on his life expose Donovan’s true nature? Will the killer learn the secret that will guarantee a permanent death? Or will Donovan finally manage to put an end to the killer’s murderous spree and live happily ever after, with his lady love?

Coming soon to all major booksellers!