This week in The Loft: Author Seelie Kay!

Okay, this is a bit weird. After a scheduling snafu with another author, a friend suggested that she interview me instead. As she put it, "Who better to tear down the myth that is Seelie Kay than someone who has known you for 30 years? And I've read every one of your books, so I think I'm qualified." So, after a little negotiation (okay, a lot), I consented to this interview. Enjoy! 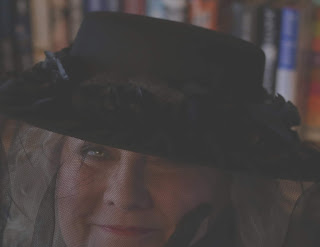 D:  Ah, at last I have you in the hot seat! Millions of questions, so little time. Let's begin with the obvious. Why the hell do you write about lawyers? Seriously, they have got to be the most boring people on the planet. What do you find interesting about them?

S:  (Laughs.) Oh, that's rich. This from a medical doctor, the most boring profession on the planet. What normal person wants to deal with blood and guts for a living? At least lawyers don't have a God complex. It's not like you actually save the world. That's what lawyers do.

D:  (Snorts.) So glad we started with a glass of wine. I think I'm going to need it. If you think lawyers are so ripe for romance, why didn't you marry one?

S:  Because I never met one who did anything but piss me off? (Laughs.) I've met many hot lawyers, but dating one just seemed a bit incestuous. For probably the same reason you didn't marry a doctor. Seriously, after cohabiting in a cave with a bunch of baboons for three years, would you settle for a baboon, or would you seek out something different, more unique?

D:  (Giggles, for way too long.) You realize baboons are rather promiscuous, right? (Wipes eyes.) Seriously, I'll bet if you met one of the lawyers you've created in your books, you'd fall hook, line, and sinker. Lordy, the things you make those men do! My husband won't let me read your books at night. Says they give me too many ideas. (Takes a sip of wine and fans herself.)

S:  (Blushes.) Is there a question in there?

D:  (Smiles wickedly.) Is Professor Janet MacLachlan your fantasy self?

S:  Sort of. We think alike. We have similar backgrounds, similar personalities. However, I've never been a law professor or a secret agent. But I've always wanted to be Emma Peel, Diana Rigg from the old Avengers. She was so witty, sleek, and deadly. (Sighs) In another life, that should have been me.

D:  I think the similarity lies in the avenging angel personality. You've always had a thing about justice. I've seen you pull a rabbit out of the hat when you think someone has been wronged. Whether working as a reporter or a lawyer, you don't stop until you find the answer and right a wrong. You're a bit intense, sometimes.

S:  As I say in my books, it's not about vengeance, it's about justice. I honestly believe that. 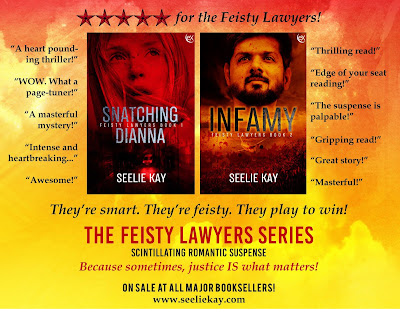 D:  Tell me about the book you just finished, "Cult," Book 3 in the Feisty Lawyers series. Are you drawing on personal experience or just relying on stories you've heard, things in the news?

S:  Actually, I was inspired by two things. First, a friend who escaped from a cult in the 80s, and second, a relative who actually lead a notorious cult, profited greatly, then was exposed by a journalist. That was my starting point, but as I got more into my research I realized that in some cases, religious cults actually deal in slavery. Cult members may be nothing more than forced labor. Everything they do, everything they earn, belongs to the cult. So then I began to wonder, why do these people stay? Are they psychological captives or something more? Because once you're stripped of your worldly goods, then your individuality, your personality, and your identity, what's left?

D:   So your bevy of attorneys/secret agents rush in and save the day?

S:   Not exactly. Things get complicated. This time, justice comes in the form of exposure, not necessarily legal remedies. Sometimes, information is more powerful than justice.

D:  Do you think you'll continue to write about lawyers or are you going to shift gears eventually?

S:  (Shrugs.) Law is what I know. My exposure to Lawyerland has been unique. I've met presidents, supreme court justices, and some of the top lawyers in the land. But I've also met the lawyers who struggle, the ones who make me want to wash my hands after shaking theirs, and ones so corrupt that they frightened me. With all those personalities swimming around in my head, my mind never shuts down. However, one of my next books is going to take a dive off the deep end. It's going to be about a lawyer who's a vampire. He's being targeted by a serial killer, and well, things get bloody.

D:  (Drains the last sip of wine and holds out her glass for a refill.) So that wicked sense of humor is going to come out full force? First, we kill all lawyers...

S:  (Smirks.) I might knock off a couple of doctors first.

D:  Hell, even I could give you a few names. OK, you said I had to ask for a blurb, whatever the hell that is.

S:  Kind of like a doctor describing a procedure, but with a lot more panache.

It's supposed to be a simple assignment. A quick trip to a South American country for an "in and out" fact-finding mission. Unfortunately, the targeted cult has other ideas.

When college students begin disappearing from American campuses, a notorious cult, God's Delight, is the primary suspect. God's Delight has been hosting shows featuring sex, drugs, rock and roll around the country, and young people are flocking to them. Among the missing is the President's goddaughter and he wants answers. He asks Agent Cade Matthews, a member of a secret covert organization, to find her. The mission appears fairly straightforward. Find the God's Delight compound, determine whether a welfare check on American cult members is warranted, and get out. Simple. Clean. Easy. Cade sends Agents Dianna Murphy and Anders Mark to the University of Wisconsin to follow the trail to God's Delight, but when they wind up in Bolivia, things go sideways. Suddenly, what appeared to be nothing more than a simple "in-and-out" turns deadly. When an Agency extraction is ordered, chaos ensues, and the question becomes, will anyone survive?

D:  Well, crap. That sounds intense. It will probably give me nightmares.