Joining me today in The Loft is romance, suspense, and Sci-Fi author Kayelle Allen. Kayelle writes books with misbehaving robots, mythic heroes, role playing immortal gamers, and warriors who purr. Because she believes people don't buy books, they buy experiences, she strives to create stories people read, get lost in, and think about long after the last page. Kayelle is also the founder and administrator of Marketing For Romance Writers, a group that assists writers of romance with promoting their books. A veteran of the U.S. Navy, Kayelle claims she's been married so long, she's tenured!

S:  Good morning, Kayelle! Thanks so much for stopping by!

You seem to have a very active imagination. Can you name one person, book, or song who/that inspires flights of fantasy?

K:  Just one? Hmmmm. I'm going to go with Nik Nitsvetov, the Russian cosplayer who portrayed Pietas from "Bringer of Chaos" last year. He and I are planning another cosplay event this year. To see the kind of work Nik does, check out the Ritual of Strength video. This is taken from scenes in both my books. (https://kayelleallen.com/gateway/pietas-ritual/) If this guy doesn't inspire flights of fantasy, nothing will. I'm going to add a second inspirational person here, Zack Black. He's literally the voice in my head when I write Pietas. He narrates this video. Zack completely captured the way Pietas sounds and even his voice. Surreal to see the physical person I imagine and hear his voice -- both come to life. This was an incredible undertaking and I can't wait to do it again. Links to both men are on the page referenced above. Okay, and one more thing. I listen to a playlist of songs while I write and that is a huge inspiration. The music includes "Nameless Heroes"" by Audiomachine, "Master of Time" by Epic North, and "Asimov" by Nick Phoenix. There are more songs, but those get played over and over.

S:  What should people know about you?

K:  I am a super busy person. Who isn't? However, I love cosplay and most of the people I follow on Instagram are cosplayers. But I don't dress up or take part in cosplay myself. I just photograph and enjoy it. They should also know that I love art and create my own banners. I have a creative team of designers with whom I work, which includes Nik, Zack, NanoCore (a digital weaponsmith), and Zealot6 (a video designer). You'll be seeing more videos in the near future. I'm producing several. I also own two book publishing companies, each built to feature my own books. Romance titles come from Romance Lives Forever Books and future science fiction titles (without romance) will come from Lucsondis Books. I also manage Marketing for Romance Writers, a peer-mentoring group for authors, and host authors on my daily book blog, Romance Lives Forever.

S:  (Chuckles.) Geeesh! When do you find time to sleep?

Complete this sentence: "When one of my books is released, I..."

K:  ...I am amazed I actually finished the thing. I must write. It's in the blood. But it takes so much to create a book that it's just a miracle when it's finished. I can't just write it and throw it out there. I plot, plan, edit, rewrite, edit again, send the book through multiple channels of beta readers, story editors, and final editors. If needed, I repeat steps. I'm never satisfied until it's as exciting and as perfect as I can make it. So maybe I should say that when one of my books is released, I'm exhausted and ready for vacation.

S:  (Chuckles.) I don't believe my books have been published until I actually hold them in my hands.

What's the best advice you have ever been given?

K:  Write what's in your heart. No one can write only what they know. If they did, there would be no science fiction, no ghost stories, no Arthurian legends -- you get the idea. We can prepare and research and speculate, but we can't know. So do what you can to be accurate, but you are a writer. You are the one who says "In my world, it works like this." Best advice ever. Despite my penchant for perfection, I believe this with all my heart. It's my world. If I want it, I make it happen.

S:  A little self-belief in your ideas goes a long way. What's the best advice you have ever given?

K:  If you want to be a writer, don't let anyone steal your dream. Don't quit. Don't give up. Don't stop. The people who keep going and finish are writers.

S:  Exactly. There are so many out there eager to crush your dreams. Believe in yourself and forge ahead!

If you could "seize the day," how would you do it?

K:  I would not be flat on my back in bed thinking about writing a story. I would be up writing it. Plotting it. Making notes. Time is getting away from me fast. I don't have time to waste thinking about what I want to do. I need to do it. Now. Today. That's how I seize the day. I just do it.

S:  (Smiles.)  Spoken like a true writer. Writing is not only what we do, it is who we are.

Tell me about your book, "Origin of Pietas."

K:  This is Book 1 of the Bringer of Chaos Series, which is about military genetic engineering in a dystopian world. Here's the blurb--

A captive of the people he loathes, the immortal Pietas is left for dead on the planet Sempervia. Six, a human soldier who is abandoned with him, offers food and water. A human, offering friendship? Surely, this is another trap, but to survive, Pietas must do that which he most detests. Trust a human...

"Forged in Fire" (Book 2) continues the saga and "Watch Your Six" (Book 3) is in progress. 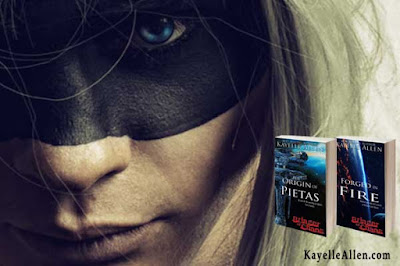 K:  It's available on Amazon and Kindle Unlimited at--
https://books2read.com/u/4DovO7.

S:  Kayelle, thanks so much for joining me today. To learn more about Kayelle, please visit--

You can also join one of Kayelle's Reader Groups, download four free books, and get news about books coming soon. You can unsubscribe at any time.  Here's the link--
https://kayelleallen.com/reader-groups