This week in The Loft: Author Christina Lynn Lambert!

Joining me today in The Loft is Christina Lynn Lambert. The author of the Stranger Creatures series, Christina writes dark, sexy, suspenseful romance. The Stranger Creatures series takes place in Great Oaks, VA, where shape shifters walk among regular humans, but everyone has secrets. She is currently working on the Guardians of Blackstone Beach series. When not writing, Christina enjoys spending time with her family.

S:  Why do you write romance?

C:  Love is often overlooked at as an unnecessary afterthought or as a mistake by those who have been burned once or twice. I felt like it was important to create characters who were imperfect but had the courage to take a chance on love. I wanted to show that love is possibility for everyone, not just runway-perfect models or people who have never made mistakes. After reading a few modern romance novels--books by Shelley Laurentson, Nalini Singh, Shannon McKenna, and Rebecca Zanetti, for example--I knew for certain I wanted to be part of a genre that represented strong female characters who ask for what they want and play a key part in the relationship with their significant other, rather than simply settling for a role as someone's afterthought or inconvenience.

S:  The way women are portrayed in some romance novels has always bothered me. I think the weak, fickle female who can't handle life without a man propping her up misrepresents most love relationships and does readers a great disservice.

C:  Often, I do my best thinking when I’m away from my computer. I get ideas when I’m driving or during a work-out, even while I’m in the shower. Since ideas tend to hit me at the most unexpected times, usually when I don’t have a pen or can’t write anything down, I just have to arrange and rearrange the possibilities and paragraphs in my head and try to remember as much as possible until I can sit down with a pen and paper.

S:  (Laughs.) I know that feeling. I am always grabbing my phone in the middle of the night to record an idea. Otherwise, I can't sleep!

Name one person, book, or song that inspires your flights of fantasy.

C:  "Learning to Fly" by Pink Floyd never fails to take my mind off the ordinary and make me imagine being weightless. The music mellows me out and this song, along with "Touch of Grey" by the Grateful Dead, is usually on whatever play list I listen to when I’m deep in my writer’s cave, trying to create the next chapter of a work-in-progress.

S:  If you could live in any period of time, when would it be and why?

C:  I would go back to the not too distant past (because I like running water and not having to kill my dinner and skin it myself) and explore the music scene of the 90s. I would hang out in bars and tiny little night clubs to see some of the bands and singers perform back before they were famous.

S:  (Chuckles.) That sounds like fun! I imagine you'd also pick up some great material for a book!

What’s your favorite day of the year and why?

C:  Halloween is my absolute favorite day of the year. I love that we get a chance to celebrate some of the macabre things that our imaginations can create. The idea that we can choose to celebrate the things we’ve left behind and the things that scare us, knowing we have the ultimate power over fear is so empowering to me. Also, I love the candy (except candy corn and fireballs).

Tell me about your book, "Bear's Edge."

C:  Sure. "Bear's Edge" is a paranormal romance novel. It's the second book in the Stranger Creatures series. Here's the blurb--

A boss can't date her employee—simple as that. No matter how much Shayla wants to unravel a few of Grant's mysteries and take her friendship with the shy, sarcastic man to the next level, she's determined to keep her fantasies of him to herself.

After bear shifter Grant lost his girlfriend and three best friends in a fire, he did his best to shut himself off from everyone around him. Falling for Shayla wasn't part of his plan, but after a kiss that leaves them both speechless and hungry for more, Grant can't keep his desire for his boss under wraps any longer. When things between the two of them get hotter than he could have imagined, Grant wonders- will some of his darker desires be too much for Shayla or will she embrace the needs he’s kept hidden for so long?

An obnoxious reporter and Shayla's bitter ex have teamed up to chase down conspiracy theories that could destroy Shayla's business and worse, put her life in danger. To find their happily ever after, Shayla and Grant will have to trust in each other and find a way to crush all the obstacles standing in their way. 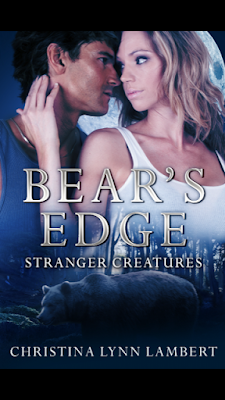 S:  Oh, I love shifter romances! Where can readers buy your book?

C:  It's available at all major booksellers, including--

S:  Christina, thanks so much for joining me today! To learn more about Christina and her books, please visit--